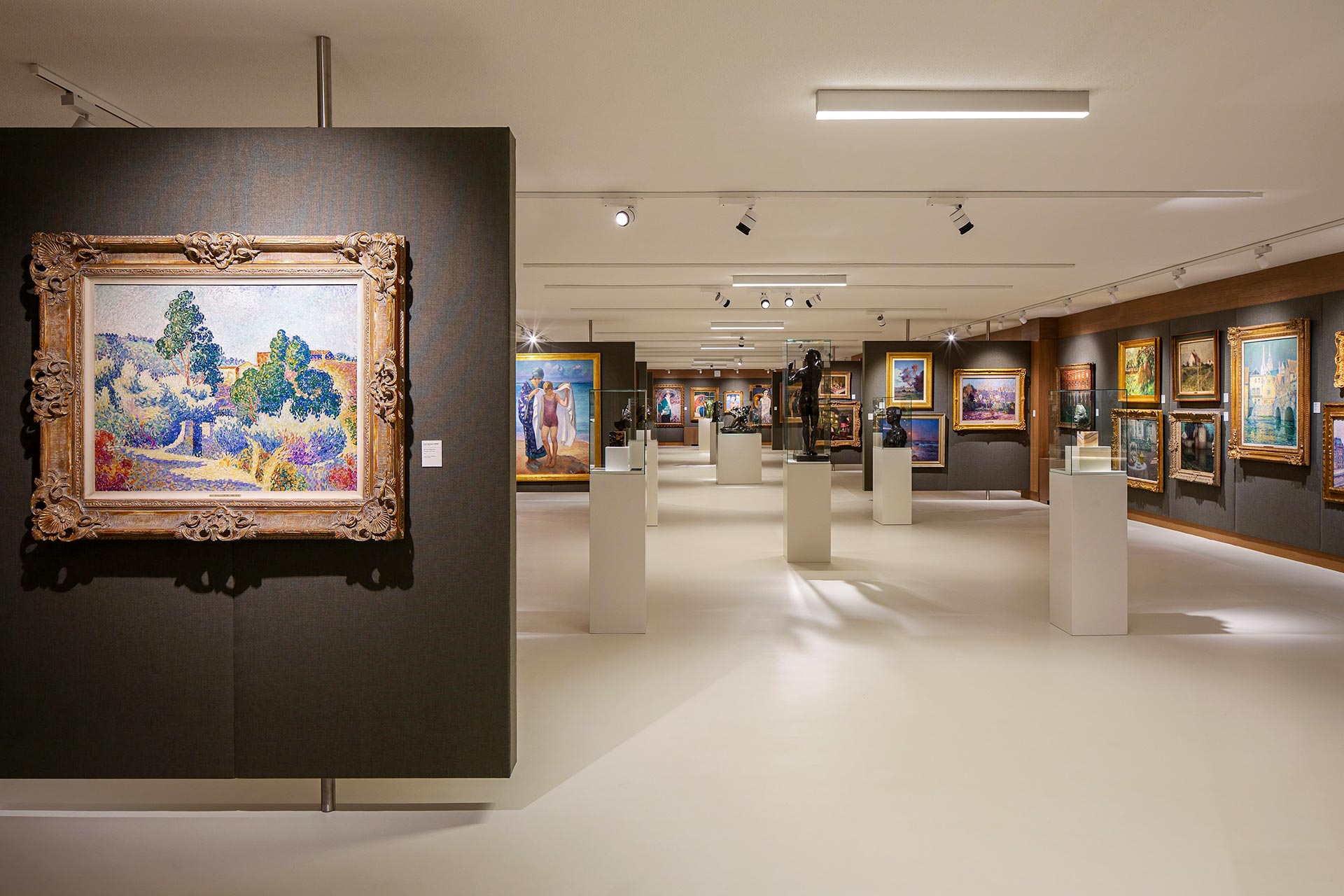 Presenting the Arkas Art Collection with a holistic perspective, Arkas Art Urla takes art enthusiasts on a historic journey with its modest and impressive architecture bearing traces from the ancient period.

The Arkas Collection was established as a corporate collection through meticulous efforts for over 30 years, and it continues to expand in line with specific quality criteria including the importance of each historical artifact in its respective period and the technique used in its production. Founded to share the Arkas collection with art lovers, Arkas Art Urla displays tapestries from the Renaissance period, the armors and weapons specially designed for the members of the European dynasties, and the works of prominent Western painters and sculptors.

Arkas Art Urla, with a modest and sturdy architecture, consists of semi-outdoor and indoor exhibition spaces. While the natural stone cladding used in the whole building enables Arkas Art Urla to build a strong bond with simplicity and nature forming its architectural character, its outdoor layouts also represent an art-focused approach. The works displayed in Arkas Art Urla are all pieces of the Arkas Collection.  Painting and sculptures welcome visitors on the ground floor of the two-storey exhibition space. The selection brings together pieces from the pioneers of modern art in painting and sculpture, who met in and around Paris in the most exciting and progressive years of art history. 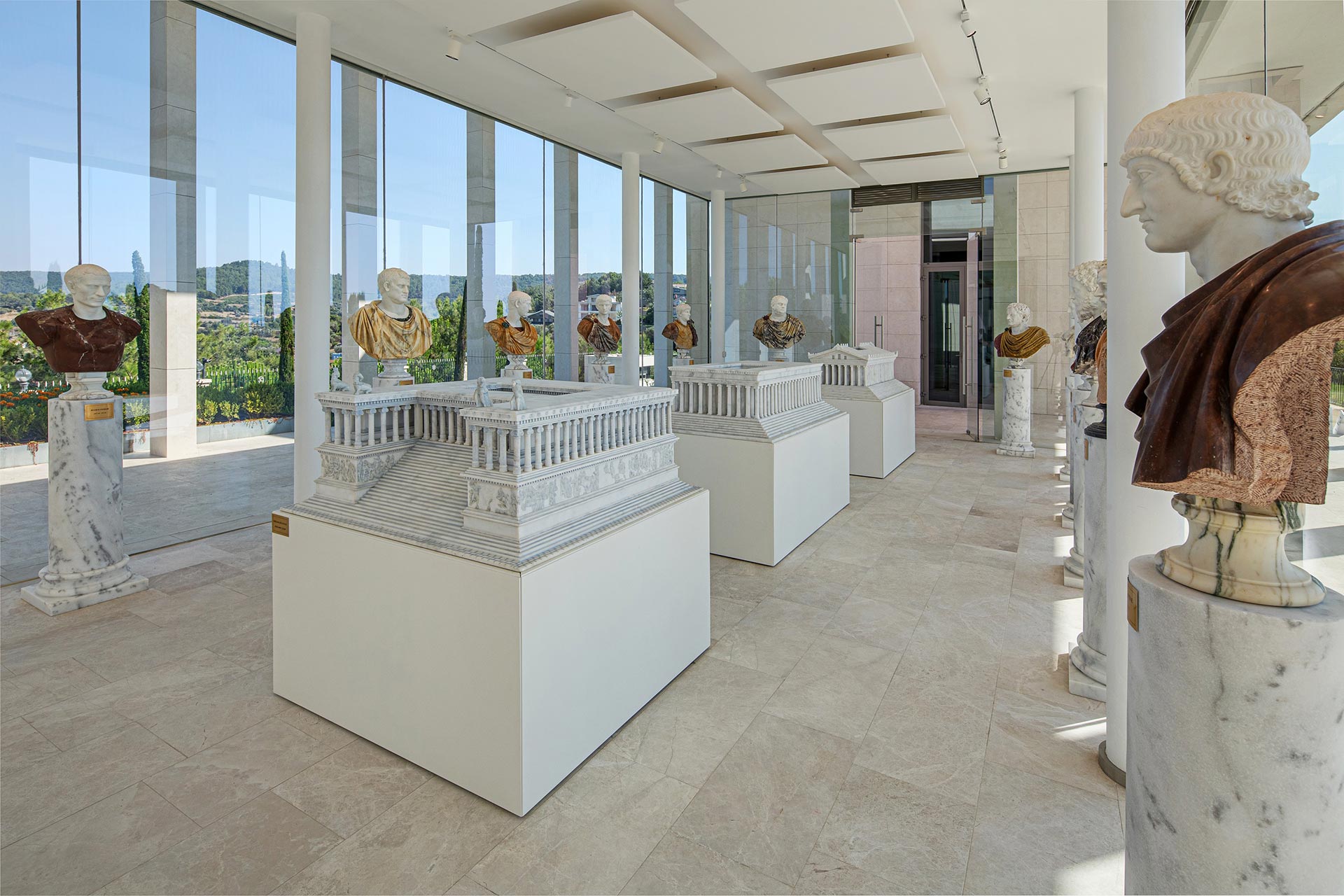 The painting and sculpture selection covers the period in which the footsteps of modernism were heard in art history and when new trends against the doctrines of the Academia blossomed. Many artworks from the crucial representatives of this inspiring period in art and sculpture are being displayed. Édouard Vuillard, Louis Anquetin, Henri Martin, Georges Braque, Charles Camoin, Maurice de Vlaminck, Maurice Utrillo, Henri Edmond Cross, Francis Picabia and André Lhote are among the artists that come to the fore in painting. Among other crucial artworks, Arkas Art Urla also exhibits the works of: Auguste Rodin, who carried the long-standing traditional European sculpture from the 19th-century romanticism to the 20th century’s modern art; Camille Claudel, one of the most prominent female sculptors of her period; and Aristide Maillol with his classical touch.

As the visitors move the upper floor, they step into a completely new period, traveling a few centuries back in time. This section exhibits extremely rare tapestries reflecting the symbolist and elaborative approach of the Northern Renaissance, produced in the Flemish Region in the 16th century. These tapestries are accompanied by a selection of armors and weapons which qualify as works of art, going beyond their functionalities, and are mostly tailor-made for the royal guards or members of the European dynasties that reigned mainly in Germany, Italy, and Austria, throughout the 16th and 17th centuries.

The Venetian Ceremonial Shield is probably the most striking piece in the selection of armors, helmets, and weapons displayed on the second floor. The Ottoman motives on this shield crafted for the guards of Wolf Dietrich von Raitenau, Prince-Archbishop of Salzburg, show a reflection of the Ottoman-Austrian relations and the impact of Ottoman art in Europe during the reign of Suleiman the Magnificent. The tapestry series, deemed as one of the most important examples of Flemish textile art and Northern Renaissance and formed of 6 pieces, immediately attracts the attention of the visitors as they enter the exhibition space.  The tapestries in this series depicting the story of Julius Caesar are some of the most outstanding pieces of the collection with their wide margins ornamented with mythological and allegorical scenes. 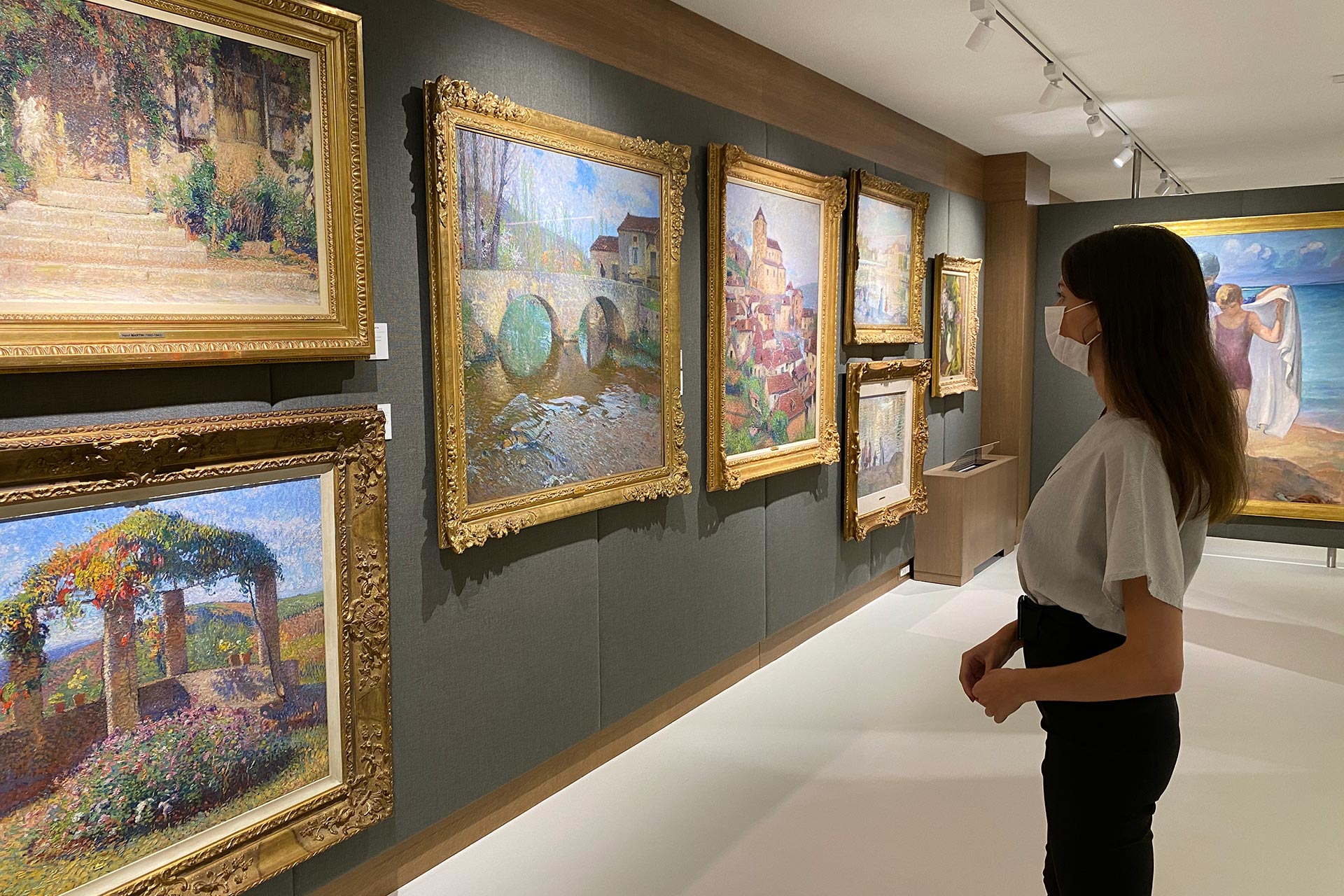 Another group of works on the upper floor is the Ottoman carpets manufactured in Uşak in the late 16th century and the 17th century. These carpets with fame exceeding the borders of the Ottoman Empire were in demand by the upper classes in Europe. The visitors can view examples of Uşak carpets with medallion patterns in this section. 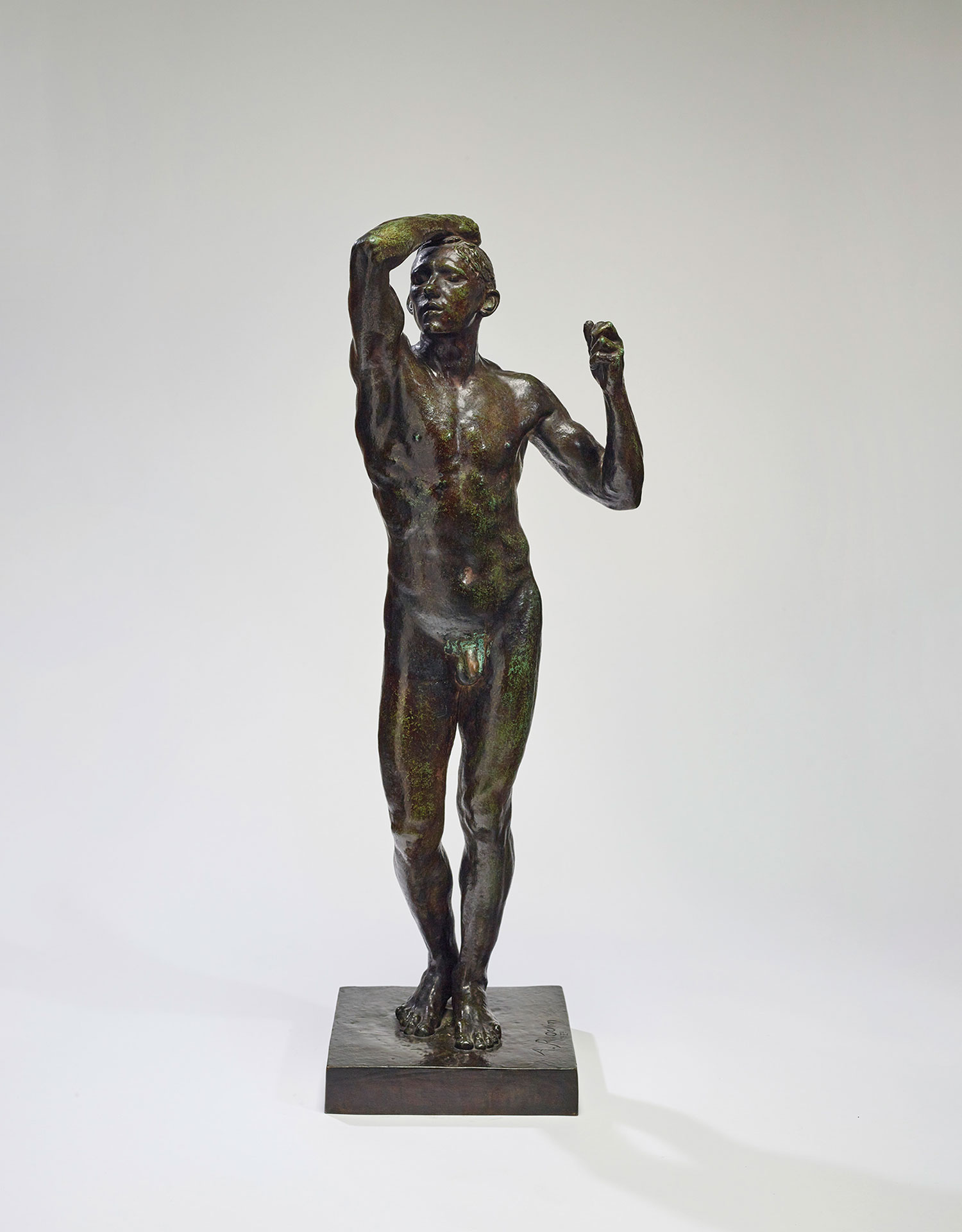 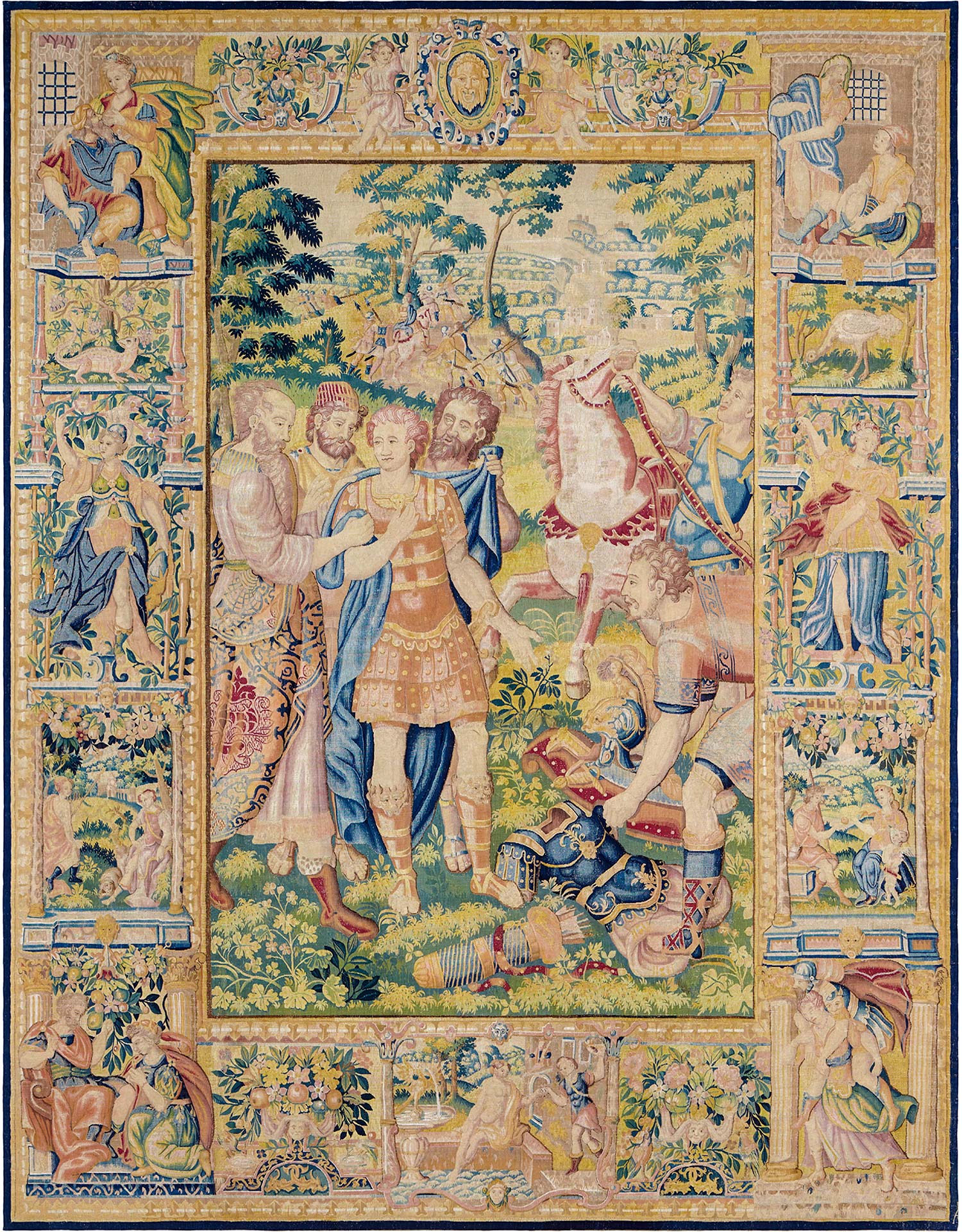